With the different qualities of wines that it offers, Cantina Majolini has full right to be included among the list of top wineries, not only in Franciacorta, but throughout Italy. Over the last few years, the winery has drawn attention to itself in the wine business through the passion, skills and hard work of the Maiolini brothers, and it has now reached the highest levels in the industry. The adventure began in the early 1980s when the Maiolini brothers – Gianfranco, Piergiorgio, Stefano and Ezio, the latest generation of a family that has always lived off the land – returned to their farming roots. Renovation of the old family winery and the acquisition of a first plot of vines represented the start of the plan that their father Valentino had launched in the 1960s. This adventure was an important contribution to the history of Franciacorta, which had lost his traditional wine-making vocation. Today, thanks to the dedication of the Maiolini brothers, Majolina wine has returned to the municipality of Ome (a grape from which the family has derived its own surname) and will shortly be deservedly awarded the official recognition of “indigenous grape”. This vine is undoubtedly one of the longest-established in Brescia and typical of the large vineyard that once covered most of Ome. It produced huge quantities of intensely red wine and was the wine drunk by the locals. Now the Maiolini brothers have saved it from almost certain extinction and brought it back into use. In addition, they have built a new winery, one that meets modern wine-making requirements, and which is more welcoming and elegant. This huge step was decided by the purchase of the superb vine-growing land known as ‘Campei’ in the heart of Ome at the start of the 1990s. 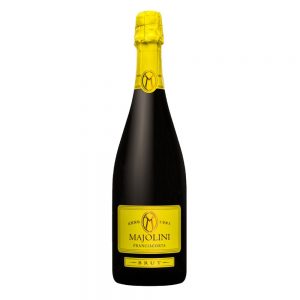 Franciacorta is one of the best-kept secrets among Champagne lovers. It’s produced in Lombardy in exactly the same way as champagne. The main difference is that it ages on the lees longer than Champagne, making it even more toasty and complex.

For the time being our delivery schedule has changed, please visit our How To Order page to see when we deliver to your area Dismiss