Madeira is the designation of both a wine region and the unique wines produced there. It is the name of a group of tiny mountainous, volcanic islands in the Atlantic, closer to North Africa than Portugal, discovered by Portuguese sailors 600 years ago in 1419. Generally, the wines of Madeira are both oxidized and maderized, making them some of the longest lived wines in the world. They are made in a variety of styles based either on grape type, minimum age length or level of sweetness. The maderization or 'cooking' of the wines is done in imitation of what long sea voyages crossing the Equator, often twice, did to the wines in their heyday 400 years ago. Top quality Madeiras are often single variety wines made from four grapes: Sercial, Verdelho, Bual or Malvasia (Malmsey) but the majority of Madeiras are made from a grape called Tinta Negra Mole considered good if less noble but that was planted widely after phylloxera ravaged the island in 1872, along with some terrible American hybrids that are illegal now and have almost all been ripped out. The four premium grapes are slowly regaining acreage as the hybrids are eliminated. 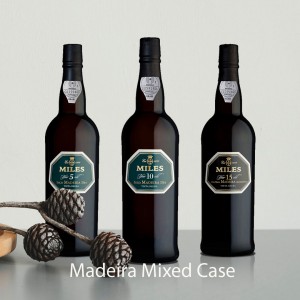 A case contains 2 bottles of each of the following: Miles 5 Year Old Medium Dry Topaz colour with golden reflections. Characteristic madeira bouquet of dried fruits, orange peels and notes of wood. Medium dry at first, followed by an attractive freshness of citrus flavours, with a long, luxurious f Read More