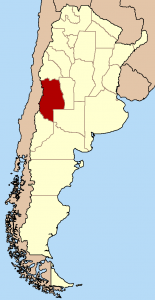 Argentina is the fifth largest wine producer in the world, but it’s only in the last 20 years or so that they have been a significant exporter. Wine has been produced here since the 1500’s, first introduced by Spanish settlers. For hundreds of years, the industry produced only for the local market, primarily from local “pink” grape varieties such as criolla grande, criolla chica, and cereza. Argentina’s most famous grape, Malbec, was probably introduced to the country in 1868 by a French agriculturist. The grape flourished in the hot, dry climate and is now the most widely planted quality grape variety in the country. Nearly three-quarters of Argentina’s wine production takes place in Mendoza, which is as high as 1500 meters above sea level in the shadow of the Andes. This altitude allows for long, slow ripening period, which builds complexity in the predominantly red wines of the region. The wines are intense, ripe and powerful.