Home / Featured / Wine in Vienna – A Streetcar to the Vineyard
by: Peter Wearing Featured 2 comments April 24, 2020 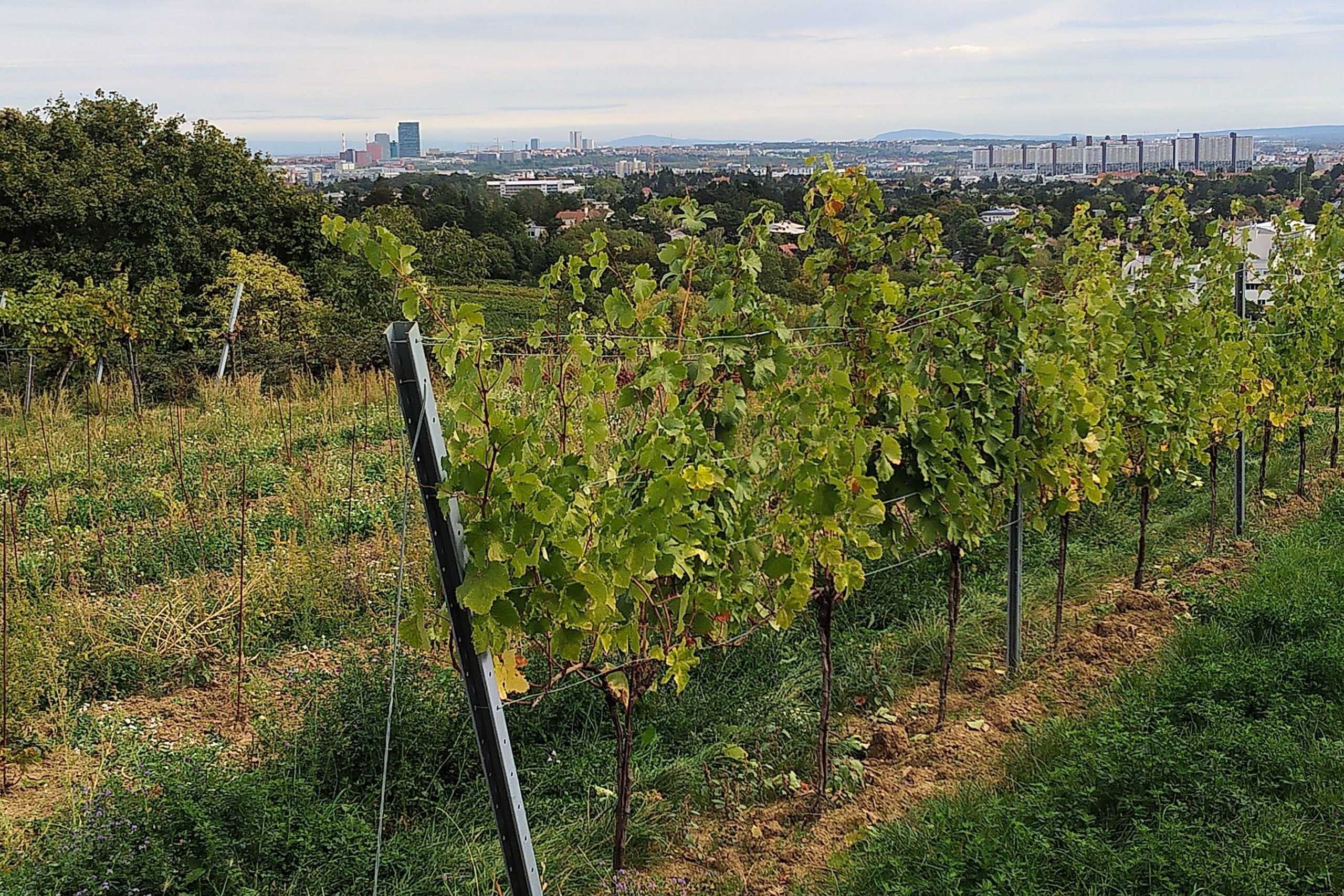 Wine in Vienna – A Streetcar to the Vineyard

We were lucky enough to be in Austria for an extended weekend last September to explore wine in Vienna. On a beautiful sunny Saturday morning, we decided to visit our friend, winemaker Alex Zahel at his winery in the 19th district. From our Airbnb in the center, we hopped on the streetcar and rode through the city for 30 minutes. As easy as that, we were at the winery, ready to embark on a discovery of the wines, the vineyards and the cuisine of Vienna. This article will discuss the wines of Vienna, with a focus on its main grape variety, Gruner Veltliner.

History of Wine in Vienna

Vienna is probably the only capital city in the world that can advertise a significant wine industry within the metropolitan boundaries. The first documented mention of vineyards in Vienna dates back to the 12th century, but some say the Emperor Probus, in his Roman military camp of Vindobona, promoted viticulture. Wine was part of Roman legions’ salary and transporting wine from Italy was getting too expensive.

Following Roman times, it was during the Middle Ages that vineyards began to sprout up around the city, but mostly on the outskirts and suburbs. Not always being of good quality, rumor has it that some of it being was so sour and undrinkable; they used it to mix mortar for Saint Stephen’s Cathedral rather than pour it out. Sometimes, to make the wine more palatable, substances were added such as honey or saffron but that was outlawed when wines with harmful additions started appearing.

Emperor Joseph II regulated the transfer of wine from vineyards to tavern and in 1784, the typical Viennese Heuriger (wine bar) was born. The ordinance stated that everybody was allowed to sell home-made food and wine without obtaining a special permit.

Two other events impacted the history of Viennese wine. Phylloxera (vineyard pest) destroyed most of the vine stock in the mid-19th century and resistant rootstock from America had to be grafted onto existing vines in order to reestablish the vineyards. Also, the antifreeze scandal of 1985 destroyed the wine market with some countries banning Austrian wine outright. Some producers had the bright idea of adding diethylene glycol to the wine, imparting a little more sweetness and body… not a good idea.

The scandal eventually lead to the restructuring of the wine industry, with new laws and standards concerning yields and styles of wine. In 2002, a system of classification (DAC) was launched. These measures have placed Austrian and Viennese wines in the forefront of quality wine production today.

With 637 hectares of vineyard and over 200 wineries, Vienna is a bustling wine region producing high quality wines within a metropolitan city. Forming a green belt around it, the majority of the vineyards today lie within the suburbs at the city limits. From varied limestone-rich soils in Ottakring and the 19th district comes beautiful Gruner Veltliner, Riesling and Chardonnay while the richer soils in the south of Vienna produce luscious reds from St Laurent, Zwiegelt, Blaufraenkisch and Pinot Noir grapes.

Most every winery produces Gemischter Satz, a typical field blend made up of 3 to 20 grape varieties, all growing in the same vineyard, harvested and vinified at the same time. Various styles are produced ranging from light and crisp to more serious, terroir driven examples. The highest portion of one grape variety must be no more than 50% and the third highest must be at least 10%. Wiener Gemischter Satz DAC was an official recognition of the uniqueness of this wine. It can marketed with a vineyard designation, Nussberg for example, usually being a more serious style, often with wood aging.

After a great dinner with Alex and his wife, we strolled the streets of Vienna for a few hours, only to end up in a crowd in front of the Opera House. We eagerly joined the lineup waiting for sausages and sturm (still-fermenting grape juice only available in the fall during harvest). Such memories last a lifetime…

Needless to say, the Viennese culinary scene is diverse. From Wiener Wurstl fast food kiosks to ethnic eateries, from fine dining restaurants to natural wine bars, there is something for everyone in Vienna.

And let’s not forget the Heurige, originally a rustic roadside taverns where people sat on long wooden benches to refresh themselves. The 1874 edict gave winemaker’s the right to set up their own wine bar and the tradition continues today with most wineries operating some form of restaurant or tavern, serving local dishes along with their wines. Typically, a Heurigen can only be open a limited period of time, giving every producer time to work his vineyards and assuring that they all have a turn at the restaurant business.

Viennese cuisine is shaped by the flavours and dishes of the lands of the Austro-Hungarian Empire and they subsequently adapted these tastes to their own regional traditions. Paprika in stews, pork from head to toe, wild mushrooms and freshwater fish are just some of the foods that are well suited for Austria’s distinctive white wines and soft and fruity red wines. Some classic pairings with traditional cuisine are:

One might also consider Gruner Veltliner, a wine so diversified that it is also a suggested pairing for all dishes above. Which brings us to the next subject…

The Best Gruner Veltliner to Buy in Ontario

One can’t help but to be intoxicated by Alex Zahel’s energy and enthusiasm. Working with his uncle Richard in the winery and assisted by his brother Gregor in marketing, Alex has taken Weingut Zahel to new heights in quality wine production. From his terroir driven single vineyard wines to his cool offerings like Orange T, all of the wines show freshness, purity and great expression.

2 thoughts on “Wine in Vienna – A Streetcar to the Vineyard”