A How-To Guide To Decanting Wine 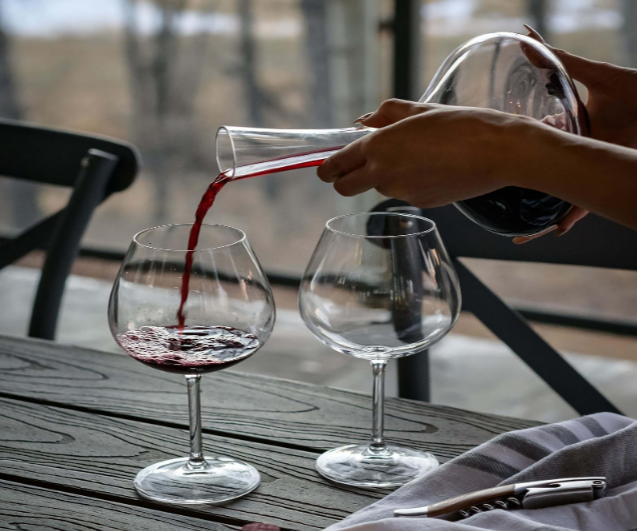 All wine connoisseurs will have heard of the term ‘decant’ and it is not unusual to see a sommelier in a fine dining restaurant decanting a bottle of wine before serving to a table. However, many are still unaware as to what this process is or why it is carried out. Below, we walk you through a how-to guide to decanting wine.

Wine Decanting: What Is This Process?

Simply, the process of decanting wine is the act of slowly transferring the contents of a wine bottle into another receptacle without disrupting any sediment. Wine is typically poured into a glass vessel called a decanter. There are many different types of decanters including the swan, duck, cornett, and more standard options.

While the act itself sounds quite straightforward, there are other considerations that must be kept in mind. One of the many reasons why wine lovers approach this process with hesitation is because they aren’t fully confident as to the means for which it’s needed. For example, which bottles require decanting? Or, in what way should I be decanting the wine?

Why Is Decanting Wine Needed And Does It Make A Difference?

Wine decanting isn’t just purely for spectacle and flourish. Rather, it is a process that seeks to elevate the wine experience and therefore, the appreciation of wine.

The question of why is often what causes the most confusion. Generally, as wines are laid flat in cellars, sediment tends to become distributed throughout the bottle. If left like this for a long period of time, it can lead to a more than sour-tasting experience if pouring straight from the bottle.

You may wonder exactly how much of a difference this makes to the wine tasting experience. If so, you wouldn’t be the first. The reality is that decanting wine not only ensures that an astringent taste isn’t left on the palate due to sediment but also opens up the aromas of a wine. For many wines, especially young wines, decanting before serving gives the wine’s flavour profile the opportunity to fully flourish. Therefore, enhancing the tasting experience.

How To Decant Wine: A How-To Guide

Next, you will need to learn exactly how this process is carried out. When it comes to wine decanting, there are two main methods: by sediment or by oxygen. Below, we guide you through both.

Sediment has the ability to deaden the flavour and expression of a wine. That is why it is recommended to remove before serving. Although many winemakers have advanced technology to filter with precision, sediment can still slip through the cracks.

Before you begin to decant wine by sediment, you need to prepare it first. If the wine has been stored horizontally, give the bottle a few days to stand so that the sediment has enough time to shift to the bottom of the bottle.  If the sediment is settled at the bottom, it makes it easier to separate the sediment at the neck of the bottle when pouring.

If you need to serve straight from the cellar, be aware of how the sediment is shifting around in the bottle. An insider’s tip is to hold a light under the neck of the bottle. Pay attention to the clarity of the wine and stop pouring once you notice the wine becoming cloudy.

Another method that many rely on is the aeration method. This doesn’t necessarily only focus on the wine’s sediment levels but also on the overall aroma of the wine. If you are trying to encourage the wine to open up, decanting by oxygen is the perfect technique.

Oftentimes, a wine can produce a smell similar to a struck match or rotten eggs upon opening when hydrogen sulfide is present. This can be common in red wines such as Syrah. In this case, pouring the contents of the wine bottle into a decanter and giving it time to aerate can recover the wine.

When you expose the wine to oxygen, volatile compounds such as carbon dioxide and hydrogen sulfide are released allowing you to fully appreciate the wine’s other qualities. To allow the wine to pleasantly open up, it is recommended to leave the wine to aerate in a decanter for several hours. However, if you are in a rush, pouring the wine back and forth from one receptacle to another can speed up the process.

Knowing When A Wine Is Ready: Decanting Timeline

As important a role that decanting can play, it is not always suitable for every wine. For example, in most cases, white wines are not put through this process. Similarly, not all red wines will require being put through either of the decanting methods mentioned above.

When trying to decipher whether a wine needs to be decanted or not, it is good to follow the following rule of thumb. It is customary to decant wines that sit on either end of the age spectrum.

If you are going to be tasting a bottle of wine that is a little bit too young, such as a Napa Cabernet, it would benefit from time in a decanter. Decanting young, brawny wines is often necessary in order to allow harsh tannins to round out and become less severe. With exposure to oxygen, the tannic structure softens and enhances the wine’s aromatic profile.

On the other end of the spectrum are those wines that have reached peak maturity. These wines, between the ages of 10 to 15 years old, highly benefit from the sediment method of decanting we spoke of earlier in the article. While it may seem counterintuitive to expose mature wines to oxygen, they are prone to presenting more sediment than younger wines. In this case, it is advisable to decant the wine and serve immediately. This will protect the integrity of the wine while elevating the tasting experience as intended.

If you have more questions about how to decant wine or questions about ordering wine from an online wine agent, our experts here at Small Winemakers Collection would be more than happy to answer your questions. Get in touch with us today.