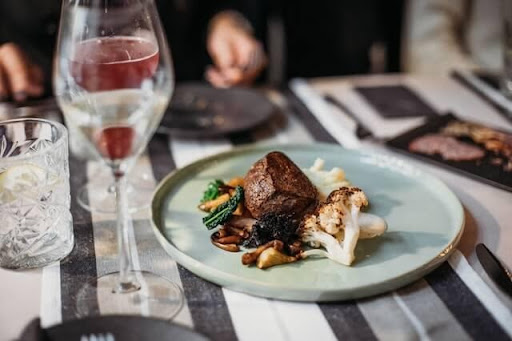 Steak and wine can be a great match, but the right wine must be selected. The juiciness of red meat combined with the smooth, ripe tannins of a full-bodied red wine is a match made in heaven. However, with different cuts as well as different ways of preparing steak, the ideal wine paring can differ.

Below, we’ll be discussing which wines are best paired with various cuts of steak. So, the next time you are in front of your wine collection wondering if a T-bone steak pairs better with a French Syrah or a Nebbiolo you’ll know exactly which bottle to reach for.

What Wine Pairs Well with Steak?

Red wines such as Merlot and Cabernet Sauvignon have been a go-to pairing option for steak for many years. However, several wine experts believe that you should never assume that red wine is the right choice until you’ve considered the full dish.

Although a Malbec is a delightful match with a melt-in-your-mouth filet, lighter red wines and white wines can be equally as wonderful. White wine with steak? Although it may raise a few eyebrows, pairing white wine and steak can be exceptional depending on the dish being served.

The key is to consider the following when deciding on a steak and wine pairing:

All of these elements can change the pairing requirements for a meal and options such as white wine and even Champagne could be considered. So, what wine pairs well with steak? Let’s dive deeper into the possibilities.

While there will be obvious elements of your dish which may determine whether a full-bodied Cabernet Sauvignon or a mature white Rioja is the right choice, there are a few rules of thumb that you can follow depending on the overall dish. Generally, fatter cuts of steak are better paired with a fuller, tannic red wine as the tannins will combine well with the red meat’s fatty proteins – making even the driest of red wines smoother. Leaner cuts of red meat, however, pair better with lighter wines.

A filet mignon is a premium cut of steak and is a highly sought-after dish in many restaurants across North America. Extremely tender, lean, and flavourful, it is often served with simple seasonings such as unsalted butter, salt and pepper. The goal of pairing this cut of steak is to not to take away from the filet’s tenderness. That’s why an old world red wine with soft tannins such as a Bordeaux blend dominated by Merlot would be an ideal pairing. The Merlot will be able to complement the flavours of the filet without overshadowing it.

The rib eye cut provides an intense, mouthwatering flavour. A fatter cut of meat than that of filet mignon, its fat content gives it an almost buttery flavour and texture on the palate. Lighter red wines will have no place here. That’s why a highly tannic , full body wine such as Napa Valley Cabernet Sauvignon will be able to cut through the fat while its bold fruit flavours will add to the complexity of the dish.

Strip-loin steak is a crowd-pleaser. Often referred to as New York Strip, this cut of meat is popular not just for its beefy flavour but also its value. Tasty and tender, this choice of steak cut is often basted in butter or served with a classic Béarnaise or Bordelaise sauce.  Strip-loin – a thicker cut of steak than others – should be paired with a wine that can complement the flavour while also offering balanced acidity to cut through the fat. The fruit forward nature of a new world Cabernet Sauvignon provides a lovely contrast. On the other hand, an oaked Chardonnay can be equally as nice if the dish is served with a crisp salad topped with brie.

The T-bone and porterhouse cuts offer the best of both worlds: the tender filet mignon side and the juicy strip side. These steaks are full of flavour and can be versatile. Popular during the summer, a T-bone is perfect for grilling on the BBQ during the warmer months.

Although the filet side is still lean, a full-bodied red is the best wine pairing for steak cuts like T-bone and porterhouse. Perhaps try a Syrah such as the Cantine Rallo Syrah la Clarissa 2019. This Italian red wine’s black pepper and mulberry notes partner perfectly with a peppercorn sauce accompaniment. A rich, aged and nutty German Riesling is also capable of standing up to this cut’s textures.

Although not as popular as New York Strip or rib-eye steak, brisket is another cut choice that should be considered when pairing steak with wine. Typically cooked for long periods on a smoker, it is the smoking method that often determines which wine is best paired with brisket.  For example, if the brisket was smoked using Hickory wood chips, then you will need to choose a wine that complements and enhances the smokiness of the meat. While brisket can be fatty it is mostly tender, therefore a low tannin wine would make a great pairing. Consider a California Zinfandel  withy plush, juicy tannins or an Australian Shiraz with blueberry or plum notes. Or if you are adventurous, a sparkling wine with high acid can cleanse the palate and cut through the smoky, fatty flavour of brisket.

The Truth About Pairing Wine and Steak

Steak can be a lot more versatile than you may think. While there are several wine options that pair well with different cuts of steak , don’t stop there. Other grape varietals such as Nebbiolo, Primitivo and Carmenere  are known for being an ideal pairing for steak, depending on the cut.

Don’t be afraid to look outside of the box for a unique match when serving wine with steak. You might discover a new favourite steak and wine pairing option that you would have never thought of before.