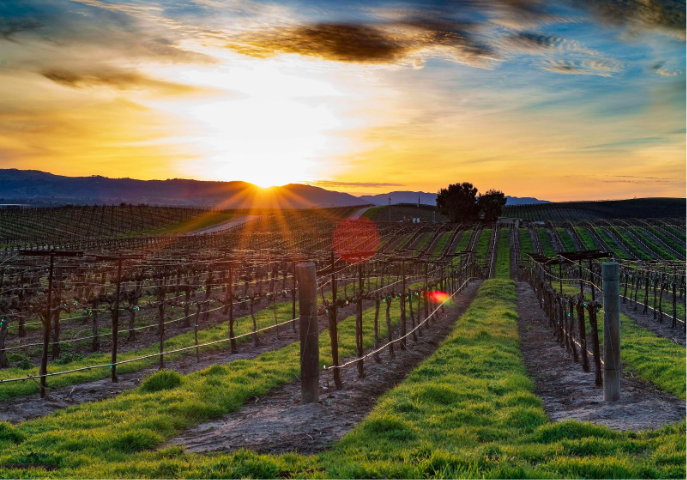 California – home of the Sunshine State, legendary beaches, exceptional national parks and some of the best American wine available on the market.

When it comes to describing this U.S state, most individuals would usually say that the words relaxed and easy-going immediately come to mind. While the lifestyle in California certainly encourages you to enjoy a slower, appreciative pace there is one thing that they take very seriously: winemaking.

If you are looking to tick the Golden State off your wine travel list, you won’t be disappointed. This part of the world offers a rich history in winemaking, decadent wine styles and to top it all off, beautiful sunshine.

Winemaking tradition began in California with the arrival of the Spanish missionaries in 1769. The first Spanish mission was established in San Diego by the Franciscan monk, Father Junipero Serra. As he moved further north, 21 additional missions were established. To each mission, the monk also brought the cultivation of grapes and the first Californian vineyards.

Criolla grapes were initially used to produce wine intended for sacramental purposes and daily table needs. In the 1830s, the first European grape varieties were introduced to Californian wine regions by Jean Louis Vignes. Shortly after, numerous vineyards and wineries were opened all over the state that heavily represented European influences from countries such as Germany, Italy, and France.

The Californian wine industry and its popularity grew rapidly in the decades that followed, except for a brief period during Prohibition from 1919 to 1932. The region was initially slow to recover, but starting in the early 1960s a new generation of winemakers approached the business with a passion which inevitably improved wine quality immensely and helped them to become international competitors in the global wine market.

Today, California is responsible for producing over 90% of the United States wine and is the fourth largest wine producer in the world.

While California is full of highly-acclaimed wine regions and wineries, there are a select few that are certainly worthy of such high praise.

Set among rolling hills, small family-run wineries to large-scale estates produce ultra-premium wines that are often sold on allocation. Cabernet Sauvignon is the key variety in this valley, and its ability to ripen consistently from year to year has helped contribute to this popularity. “Napa Cab” is rich and opulent, with complex fruit supported by toasty and spicy oak. It offers aromas of blackcurrant, vanilla, boysenberry, licorice and bittersweet chocolate.

Napa Valley is by no means a secret and welcomes many tourists each year who are looking to experience this wine region in the flesh. A must-visit for anyone looking to sample wines from California.

The Santa Cruz Mountains region was one of California’s first American Viticultural Areas (AVAs). Sitting between San Francisco and Monterey Bay, the mountain terrain has proven to be inhospitable and trying for winemakers. However, those who persevere are rewarded with some of California’s most celebrated wine.

Rich in wooded areas, small vineyards are tucked and hidden away in quiet hillsides at higher altitudes. Mesoclimates are an important factor of the terroir here. Western slopes enjoy the cooling effects of the Pacific Ocean. While the east-facing slopes enjoy a warmer climate due to their protection from the ocean.

The region is suited to the production of  Pinot Noir and Chardonnay due to its cooler climate. Yet, this doesn’t stop winemakers from producing the state’s most important grape. In fact, the Santa Cruz Mountains is the coldest-producing region of Cabernet Sauvignon in California.

When it comes to California’s central coast, you will be spoiled for choice when it comes to the beautiful landscapes and exquisite wineries of Santa Barbara County. Our recommendation is to explore the region of Santa Maria Valley, in particular.

Santa Barbara Country’s modern viticulture began in Santa Maria Valley in the early 1960s with help from Uriel Nelson and Louis Lucas. Very soon after, this region became a major producer of Chardonnay. It is now home to the renowned winery, Bien Nacido Vineyard which produces age-worthy Pinot Noir and Chardonnay.

This region was the first in the county to receive an official AVA approval in 1981. Due to its cooler mesoclimates, this region is well-suited to make quality Pinot Noir and Chardonnay but also look for Syrah and Viognier.

Located east of San Francisco Bay, Lodi County sits right in the centre of California’s Central Valley and is fast becoming one of the most exciting wine destinations of the Golden State.

This California wine region is blessed with a Mediterranean-style climate that is kept cool by a gap in the coastal mountains that draw cool air through the San Francisco Bay. California’s two largest rivers converge in this area, which helps to keep temperatures cool, especially during the growing season. For this reason, winegrowers in Lodi are able to craft full-flavoured wines with natural acidity.

Although Lodi offers a portfolio of diverse wines, it is best known for its production of full-bodied Zinfandel. Zinfandel was planted by Italian immigrants during the gold rush and many of these vines are still in production, helping to put Lodi on the wine map.

Pairing Options For Wine From The Sunshine State

A trip to the Sunshine State not on the horizon? Don’t despair. You can easily enjoy the fruit of passionate Californian winemakers labours from the comfort of your own home. Whether for an upcoming dining event or a mid-week dinner, keep these pairing options in mind.

For a Californian Chardonnay such as the Coastal Vines – Chardonnay 2018, a course of light vegetable pasta or flaky fish pairs perfectly with the citrus, oaky flavours that burst onto the palate in the form of apples, oak and orange blossom.

Californian Sauvignon Blanc was made for pairing with green vegetables. From green beans, artichokes to zucchini. It is also a beautiful match with cheese dishes such as fresh mozzarella and goats cheese.
Looking for something more robust? A Cabernet Sauvignon such as the Carmenet – Cabernet Sauvignon 2016  is a wonderful pairing for rare steak, prime rib or even halibut topped with tapenade. This full-bodied wine presents a beautifully complex bouquet of berries and chocolate that leaves a smooth lingering on the palate.