There was a time when wine was an even greater part of everyday Italian life than it is today. It was consumed with every meal and was often part of it — children, for example, regularly started the day with a slice of bread dipped in red wine. Consumption reached a peak of well over 100 litres per adult (15 years and older) per year during the early Sixties when the country was positively swimming in wine.

Around the mid-Seventies, consumption started to decline. People were drinking less, but better. By 2015, annual wine consumption had fallen more than 70% to fewer than 30 litres per person (still double that of an average Canadian). Although Italian consumption shrank dramatically, production barely changed. Italian vintners were still making wines they had to sell, even if it could not all be sopped up by the local market. So they looked to export markets.

Wines production underwent a significant transformation in response to the need to export. Native Italian grape varieties are naturally high in tannin and acidity, and these wines often required significant aging to allow the structural components to soften and integrate. But the modern consumer did not have the time or inclination to age wines, so usually-tannic wines like Barolo started to be produced with a much shorter period of fermenting on the skins. Reducing this maceration period from 30 or more days to sometimes under 5 extracted much less tannin. This, and aging in french oak barrels, produced a wine that could be enjoyed upon release. This style of wine also appealed to Robert Parker and his more North American palate.

With this success, though, came a backlash. Some producers questioned the extent to which modern processes and techniques made wines that were true to their Italian roots. Fine to sell wine to international consumers, but not at the risk of losing the great Italian wine tradition, they felt. There has, therefore, been a movement back to traditional winemaking techniques to take advantage of modern technology and know how, but to more properly reflect the rich Italian heritage. 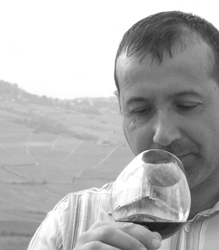 Wine makers, such as Claudio Fenocchio, in Piemonte, have gone back to a more traditional way of producing Barolo – fermenting wine on the skins for 30 or more days as well as aging in large Slovenian oak boti. He is known as a “radical traditionalist” in a region where producers classify themselves as modernists and traditionalists. Traditionalists have resisted the lure of new oak and French grape varieties and make wines much the way their fathers and grandfathers did.

Claudio’s latest masterpiece is a Riserva Barolo made the way his grandfather used to. Grapes are carefully selected from his four Barolo crus (Bussia, Cannubi, Villero and Castellare), macerated for fully 90 days on the skins and aged for 5 years prior to release. We tried this wine last Spring and contrary to what one would expect, the tannins, while present and firm, were not overpowering. Some sort of enzymatic reaction took place during the long maceration to polymerize the tannins and integrate them seamlessly with the incredible fruit character. This is Barolo at its best, and the 2010 vintage is one of the most highly rated and desired. It is no exageration to say that I have waited years to get my hands on some of this!

This was made in miniscule quantities, and we have only 25 – 3 bottle cases available. It is sure to go quickly. Lovers of great Barolo need only reply to the email or call 416-463-4683. (Limit of 3 bottles per customer.)

Pale garnet colour, showing fig, dried strawberries, blueberry and moist earth on the nose. The palate brings a burst of ultra ripe fruit framed by four-square tannins, yet kept soft and elegant by a laser beam of racy acidity.

Food Pairing: Enjoy when young with beef braised in red wine or when mature with risotto and white truffles or with feathered game such as partridge, pheasant, wild duck and squab.